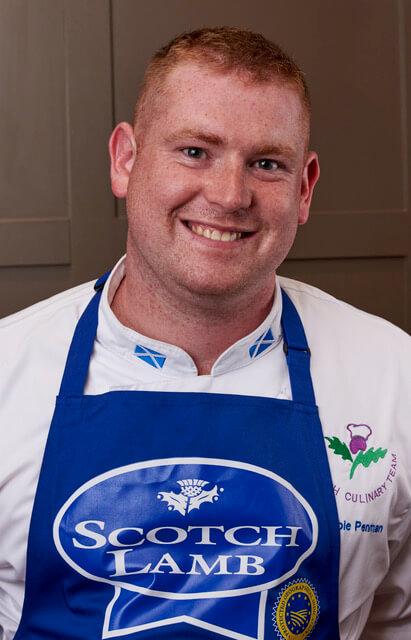 On 8 October in a hotly contested competition in Prague, chefs from across Europe, stepped up to the plate to compete for the honour of representing their country at the Global Chefs Competition Final in Kula Lumpur in July 2018. The two-man team from Scotland were Robbie Penman from Fife, currently Senior Chef Peebles Hydro, aged 30, assisted by Jamie McKinnon, the current Scottish Young Chef of the who works at the Seafood Restaurant St Andrews.

Penman who is currently the manager of the Scottish Culinary Team had 3 hours to prepare a 3-course menu for 6 people. Adhering to strict competition criteria which stipulated main ingredients for each course Penman presented his menu which wowed the panel of internationally renowned judges and brought him the honour of representing Northern Europe at the final in 2018.

Kevin MacGillivray, Scottish Culinary Team Director and International WACS judge commented: “ it was a tough competition, however, Robbie and Jamie had been determined to do well and their commitment and skill ensured that they have put Scotland firmly on the Global Culinary Stage. We are incredibly proud as this is the first time that Scotland has been represented at Global Chef final and we will be embarking on a campaign of fundraising, to ensure that we can support them on their journey.

2018 is an important year for Scotland as Robbie and Jamie will be part of the Scottish Culinary Team at the Culinary World Cup in Luxemburg in October 2018. We hope that through our activities and achievements we can enthuse and inspire young people in Scotland during the Year of Young people to consider a hospitality career”