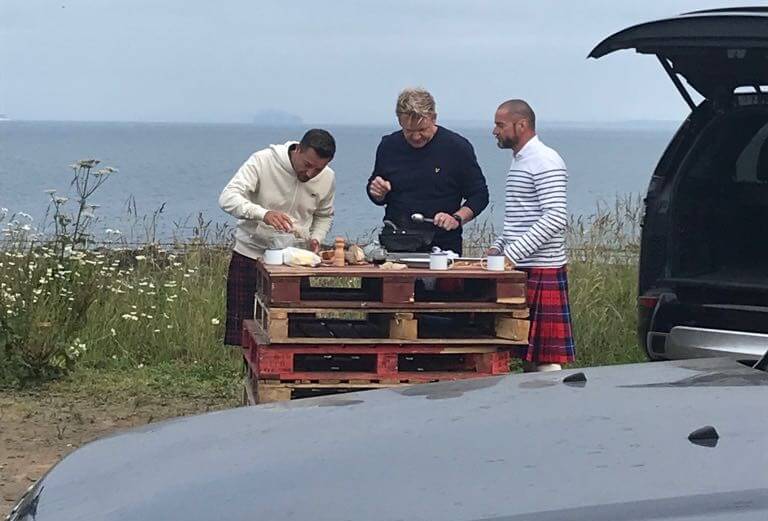 Gordon Ramsay, Gino D’Acampo and Fred Sirieix visited Ardross Farm Shop on their mission to find the best quality food Scotland had to offer. After visiting both Gino and Fred’s home countries Italy and France, it was Gordon’s turn to show them his home country and all the amazing food it had to offer.

After collecting kilts, the only attire which would be suitable for their exquisite banquet they were holding at Dalhousie Castle, they made their way to Ardross. They had the starter all looked after with fantastic west coast Oysters. However it was a real show stopper they were after for the main event. They choose Ardross Farm Shop Fillet of Beef for the main course. After helping sister’s Nikki and Claire move cattle from their coastal fields between the villages of Elie and St. Monans, they said there were immensely impressed with the care and attention the animals were given on the farm. The trio also agreed hugely with the ethos which this family farm holds at the centre of everything they do. All the animals at Ardross are grass-fed which the world renowned chefs recognised as not only one of the key reasons for the fantastic flavour but also for the huge health benefits it brings to anyone eating it. Once they picked up the 28 day dry aged fillet of beef they then went to join in with all the antics of the Ceres Highland Games. After the fun at the highland games it was then back to work to prepare all the fantastic food they had found on their road trip across Scotland for their banquet, and of course they had to end the night in a true Scottish manner with some ceilidh dancing.

During Gordon, Gino and Fred’s time at Ardross, they were interested in all the aspects of the business. Not only the exceptional beef which first attracted them, but also the lamb, mutton, honey and vegetables which are also produced on the farm. Gordon was particularly interested to find out about their farmhouse kitchen which produces food seven days a week to stock the farm shop. The Ardross team remember him saying ‘the home-made flapjacks are f****** amazing!’

Not only did they sample the delights of Ardross’s own produce, Gordon also picked up some treats, from the wonderful range of other local products this farm shop stocks, to make sure Gino and Fred didn’t forget Scotland in a hurry. These included fresh bread from the local baker, wonderful haggis (a true Scottish delicacy) and some local Ovenstone109 beer.

The family and team said they were truly humbled by such distinguished chef’s recognising not only what they have achieved here at Ardross but the true quality of everything they produce and sell. Claire Pollock (One of the family), said ‘The whole team were unbelievably excited to meet some of the biggest names in the food industry. All three celebrities were great fun and hugely inspirational while they took time to speak to us all individually. It was a huge honour for them to choose us to show case the best Scotland has to offer.’