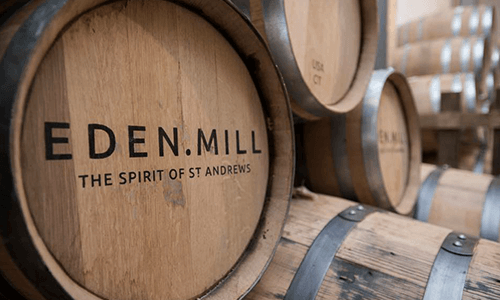 The Eden Brewery, the brainchild of Fife businessman Paul Miller, has been established on part of the extensive site of the former Guardbridge Paper Mill, and is a craft brewery producing small batch beers both in cask and bottles.

After a career in beer, wine and spirit companies both in the UK and abroad, Paul has established the first brewery in the local area since the Argyle closed in St Andrews 111 years ago.
It lies on a site with significant brewing and distilling history, and Eden's first beers are the Clock Brew(a traditional Scottish ale) the 19th Brew((IPA), the Seggie Porter based on a historic local recipe, and an outstanding hoppy Blonde Beer.
The team will also brew special edition beers, such as their Edradour Whisky range, and can work on special orders which allow customers to see the whole process from initial mash to bottle and cask.
Paul has also set up the 'Eden Beer Club, which offers members tours, priority rights to buy limited edition beers, and introductory gifts.

There is also the chance to attend three annual 'seasonal range' tasting sessions, and to contribute to recipe development through interactive sessions with the brewers. The club has already attracted over 150 members.