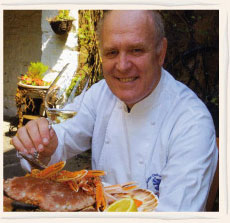 Tributes to the Cellar’s Peter Jukes

TRIBUTES HAVE been paid to an award-winning Fife chef found dead near his East Neuk home.

Peter Jukes (63) was described as “one in a million” after his body was discovered by lifeboat crews off the coast of Cellardyke on Saturday.

It came after a major land and sea search was carried out after he was reported missing from his home in Anstruther.

The owner of the Cellar restaurant in the East Neuk town, Mr Jukes was a fellow and past chairman of the Master Chefs of Great Britain and a former Scottish Restaurant Chef of the Year.

Friends said they had been left distraught by his death.

Tony Heath, a fellow chef and owner of a cookery school in Kinfauns, said Mr Jukes’ ability to train chefs was as highly regarded as his cooking.

“So many people went through his hands and are now running their own businesses,” he said. “He could train people and bring them up so easily.

“He built up so many relationships and had so much respect from others. Peter was one in a million.”

Craig Millar, owner of the 16 West End restaurant in St Monans, said: “I had known Peter for about 15 years, since when I first started here in Fife.

“He really was one of the most respected guys in Scotland when it came to seafood and his restaurant has always been at the forefront of things.

“Peter was always there for advice — he would always be at the end of the phone if you needed it. It’s tragic news.”

After purchasing the Cellar in 1982, Mr Jukes quickly made the Anstruther establishment one of Scotland’s best seafood restaurants.

The AA Guide has awarded it three rosettes for the past 17 years and in 2008 it was named UK Seafood Restaurant of the Year in the Good Food Guide.

However, after announcing his intention to retire, the restaurant, which he ran with wife Susan, has been advertised for sale.

This story has been reproduced by permission of DC Thomson&Co Ltd. See the story and image at http://bit.ly/S37RMx