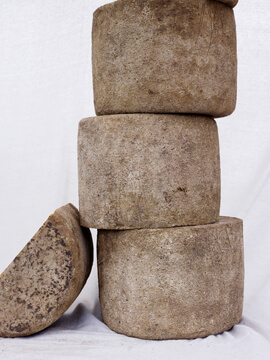 The St Andrews Cheese Company has been experimenting with a new cheese which is receiving an enthusiastic response and has already won an award.

St Andrews Farmhouse is a ‘cheddar’ style recipe, and Jane Stewart and her team will have it ready for sale from the middle of 2012,

Jane said that the cheese needs nine months to mature, and stock is being built up.

“We will be making it every week from now on, lovingly caring for it behind the scenes.

“Nine months seems a long time – but many of our lady customers will confirm that it passes very quickly!!” said Jane.

The company’s ‘Anster’ cheese and ‘St. Andrews Farmhouse’ were entered in the recent ‘British Cheese Awards’ and both won ‘SILVER’ Awards