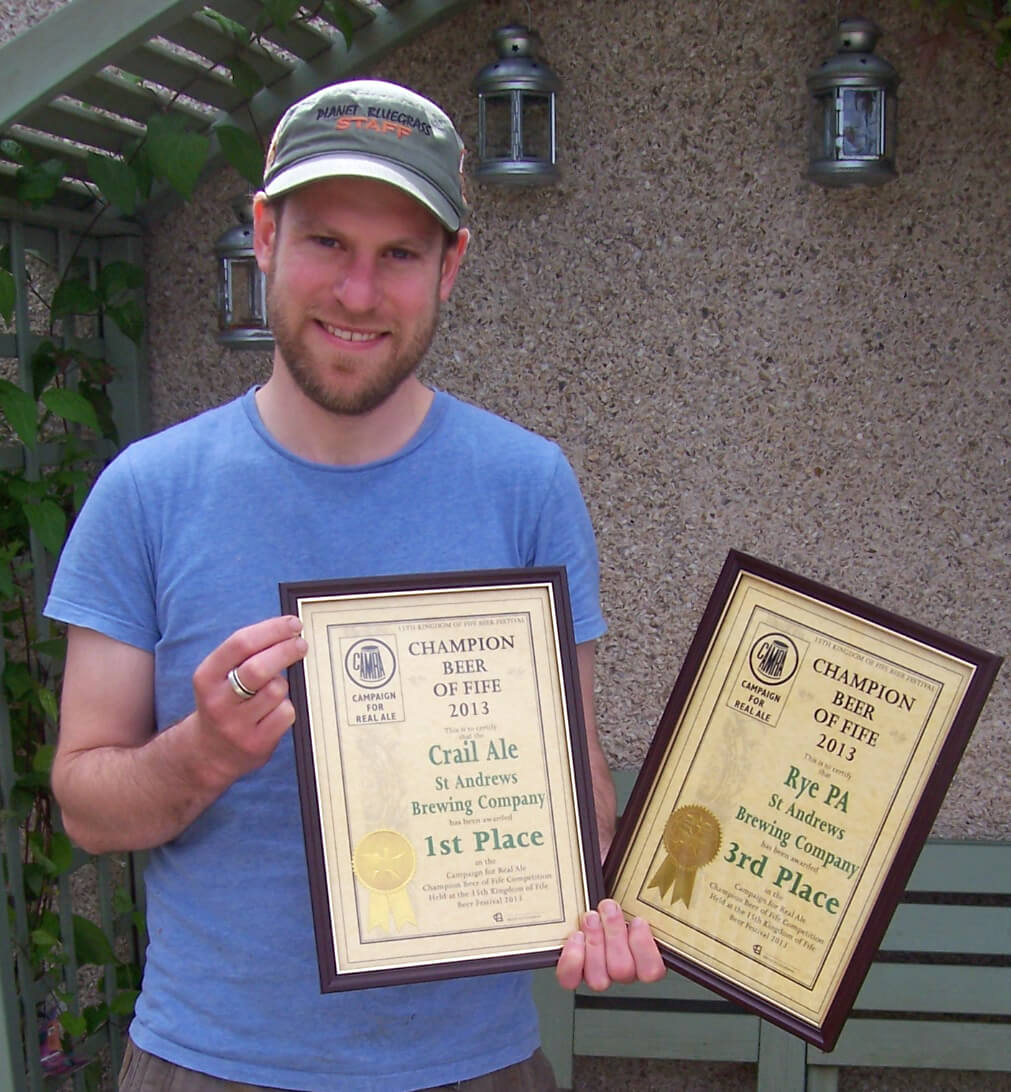 The famous golf, tourist and university town of St Andrews is about to have its very first “brew pub”.

Behind the venture is Bob Phaff of the St Andrews Brewing Company, who is currently converting a former restaurant in South Street.

He is planning to open for business this week – coinciding with the first events in the St Andrews Food and Drink Festival.

Tim has bought into the brew pub side of the business, and the pair are hugely excited about a venture that will create around a dozen jobs.

Bob told “Food from Fife” that he had dreamed of creating his own brew pub ever since he was a teenager.

He came to St Andrews armed with the enthusiasm and knowledge he gained while working in the industry in the USA, and immediately saw a gap in the market for an American style brew pub.

“The new pub and restaurant will have around 20 casks and kegs on offer at any one time, and we will also be creating a small on-site brewing facility to produce casks exclusively for the pub. We have already converted one room into a temperature controlled cellar.

“A specialist team is doing a fantastic job fitting the place out. It is full of character, and we have already found two fireplaces, and old stones that were apparently once part of the cathedral.

“There will be a simple layout, with lots of blackboards telling story of the beer and food. Susan  McGill, who already does my artwork for the brewery, is involved, and I’ve also spoken to other local artists.

“There will be a show brewery and snug type bar downstairs, with a larger beer festival type of room  room and a small tasting room upstairs.

“It is something really different from the pubs already in town. Half of the beers will be my own brews, and half other people’s beers including the “best of the best” from all over the UK, America, and Scandinavia. The cask beers will be served mainly in unusual thirds and two thirds glasses.

“There will be some high percentage beers, blondes and pale ales, winter seasonals, one offs, and  guest ales on all the time.

“We will also have a very big range of bottled beers, and I’m like kid in a sweet shop at the moment putting that together.

“The range already includes 70 bottled beers, but there’s a lot more I want to get. I’m using a great distribution company, and also cherry picking my own favourite breweries.

“On the food side there won’t be a formal sit down restaurant and we haven’t finalised the menu yet, but I am working with colleagues from the farmers’ market.

“Tim is very experienced with food, and the plan is to offer simple platters of food including fish, meat, cheese, and bread.

“I want to serve great beer and simple, good food. People will be able to come along, relax, have a beer, see some art and even play a game of chess in what will be just a great place to hang out.”

In addition to opening the brew pub Bob will be moving into St Andrews from his start-up unit in Glenrothes next year, and will be able to double his capacity in a new purpose built brewery.

“I’m taking on a full time employee for the brewery, and will still be concentrating on my bottled conditioned beers. We will also be doing casks for the brew pub, and one or two other pubs and beer festivals.

“We are quickly running out of space in Glenrothes, and the new brewery will allow us to roughly double production,” said Bob.