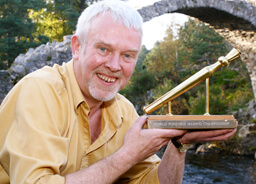 The “Italian Pinhead Torta” recipe secured creator Laurie Figone from California the coveted Speciality Trophy at the competition last year after her success in the Spar for the Spurtle contest in Portland, Oregon.

Neal has been giving cooking demonstrations at the Fife Show for the past ten years.

We caught up with him to find out a little more about why he selected Laurie’s dish: “I usually cook my winning dish from the porridge competition. Since I didn’t win last time I asked if I could “borrow” Laurie’s dish. I’ve cooked it several times already and it really is ‘delish’! I was cooking next to her in the competition and knew she was going to win.”

Neal won the “World Porridge Making Champion” title at the 2010 event and returned in 2011 to attempt to win the speciality category and that he did. Check out his winning recipe here.

He’s keeping his cards close to his chest ahead of the 20th World Porridge Making Championship this October – and rightly so – but is promising big things,“I’m thinking of going a bit “Heston Blumenthal” and getting the liquid nitrogen out!”

The Fife Show takes place on Saturday 18 May 2013 and further information can be found at www.fifeshow.com