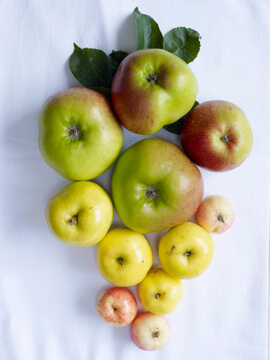 The energetic Newburgh Orchard Group will be hosting two new talks next month as members prepare to tend their trees and soft fruit during another growing season.

The events will be held in the heart of a town which has a wide variety of productive orchards, and has for centuries had strong connections to fruit growing.

It also has a thriving community orchard that was officially opened over seven years ago.

One of the talks will be delivered by orchard group member Gerben de Vries, who will tackle the topic of apple diseases and their identification, prevention and cure.

The other, from Judy Dowling of the Ancient Tree Hunt, will be on the subject of ancient trees.

The Newburgh Orchard Group was formed by local people in June 2002, and its aims are:

– to preserve, maintain and develop Newburgh’s heritage as an historic fruit growing area

– to enable local people to gain enjoyment and economic benefit from fruit growing;

– to see Newburgh put on the Tourist Trail as Scotland’s Fruit Town; – to create a resource of which the people of Newburgh will be proud

– to build up a network of fruit tree owners and bring people, skills and resources together

The community orchard was planted in 2004 by pupils from Newburgh Primary School, with support from the Newburgh Orchard Group.

The opening of the orchard was marked with a procession of school children dressed as Benedictine monks, to commemorate the 800-year old heritage of tree planting begun by nearby Lindores Abbey.

Both talks will take place on March 15, at the Learning Centre in the Tayside Institute and Community Centre.

They will start at 7pm, with entry only £1, including tea/coffee and biscuits. To reserve a place please contact Gerben at reedieden@gmail.com