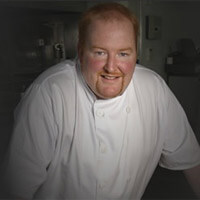 Award winning Fife chef Craig Millar is celebrating further success with the naming of his venture at St Monans as Restaurant Newcomer of the Year.

The award came at the Catering in Scotland (CIS) award ceremony as Craig picked up one of the main prizes for his stunningly sited Craig Millar@16 West End.

The restaurant lies beside St Monans Harbour with beautiful views over the village and the Firth of Forth, and Craig’s food has been receiving rave reviews.

Born and educated in Dundee, Craig started his career with Crest Hotels in Buckinghamshire in the late 80’s moving back north of the border three years later.

He had a highly successful thirteen year partnership with Tim Butler at The Seafood Restaurant St Monans and later St Andrews.

Both restaurants were also named Newcomer of the year by the Good Food Guide.

Now running his own operation in St Monans, Craig entered the CIS category for restaurants under three years old.

The award recognises the establishment which has most captured the imagination and attention of the industry, public and media.