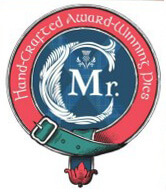 Robert won five different prizes in a competition which saw almost 1000 products tasted by the judges.

They included one of the special awards  – the Richard III ‘Pie fit for a King’ – along with silver for the ‘Piggy Black Pie’, and bronze for the Traditional Pork Pie, Mutton and Caper pie, and Game Pie.

He said that there were no other pies from Scotland on the winners’ table at the awards ceremony.

The Pie fit for a King, he said, had the game pie mix that won Diamond in the Scotch Pie Club Awards in January and the MacLean Cup for the Best Scottish Savoury entered in the whole competition.

“The pie is made with a four game bird mix, plus wild venison, with the pastry lined with smoked streaky bacon from Ramsay of Carluke,” said Robert.

Robert’s business is among several from Fife which will be taking part in the forthcoming Crail Food Festival (June 15-16). He will also be at Gardening Scotland at Ingliston from May 31-June2.