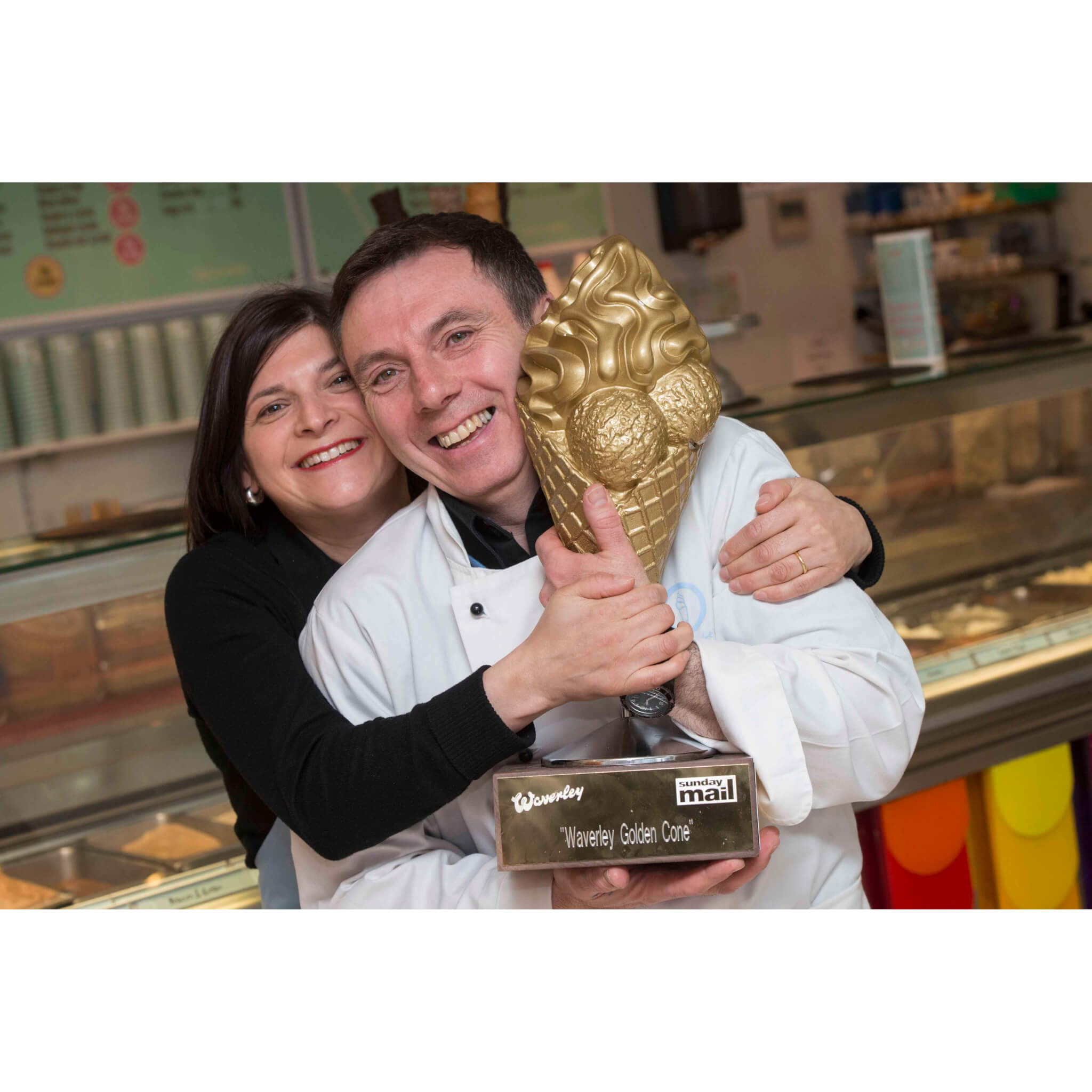 More than 2000 readers sent in nominations for the competition, which was run by the Scottish newspaper in conjunction with Waverley Bakery, Scotland’s only manufacturer of cones and wafers.

They still use the same secret family recipe, albeit tweaked with a little 21st century flair.

Owen said that he couldn’t believe that Jannettas had won.

“ We hoped and hoped we’d get it this year and I’m so overwhelmed.

“We made the finals last year and we were gutted not to win. I’d underestimated how important it was to the staff so I’m delighted for them too.

“When it’s a family business, you get to know each other well and they really wanted to win. I’m so glad we managed to go one better this year,” said Owen.

The organisers said that they had been “inundated” with entries for the St Andrews gelateria, and the judges soon found out why.

Cat said: “Jannettas is a gem. It’s got the whole mix – everything you could want from a cafe.

“There are all sorts of people queuing up to buy ice cream – loads of students, as you might expect, but plenty of middle-aged folk sitting at the tables outside, just chilling out.

“Steeped in tradition but modern too. I love the place.”

The ice cream parlour was opened in 1908 by the great-grandfather of Nicola Hazel, 44 – Owen’s wife – and they still use the same secret family recipe, albeit tweaked with a little 21st century flair.

Chef Owen took over the role of ice cream creator after Nicola’s parents, Fiona and David DeAngelis. stepped aside and, despite being the only non-Italian, he’s become a master gelatiere.

The sign out front says “Four Generations: One Passion” and it’s clear to every single customer that the passion is ice cream.

On any given day, 52 flavours are displayed in Jannettas glass counter with tastebud-tingling names such as orange and mascarpone, banana with salted maple almonds or peaches and cream.

But vanilla still far outsells everything else. A sign declares the time that the current batch was made, and a specially imported machine can pump out 400 litres of the ice cream every 90 minutes.

Owen starts work at 5.30am and, during summer months, they’re still working at 10pm, with customers queuing down the street. His children Lewis, 16, Chloe, 14, and Ross, 12, often help out too.

Libby said: “Jannettas is like a swan gliding along. It’s smooth and controlled but under the surface, they’re working away like crazy to make sure it’s perfect.

“I love that the family have been so committed to doing this for four generations. It’s a real part of the community.”

Handing over the stunning Golden Cone Award, Nadia Millar, managing director of the Waverley Bakery, said she was thrilled by Jannettas success.

She added: “To see Owen’s and Nicola’s faces when they realised they won was emotional. They work so hard, run a wonderful parlour and it means so much to them.

“All the cafes nominated were great and show Scotland has the best ice cream outside Italy. But Jannettas are worthy winners.”

This story was used with permission of the Sunday Mail.

Photograph shows Owen and Nicola with the trophy– by Alan Richardson