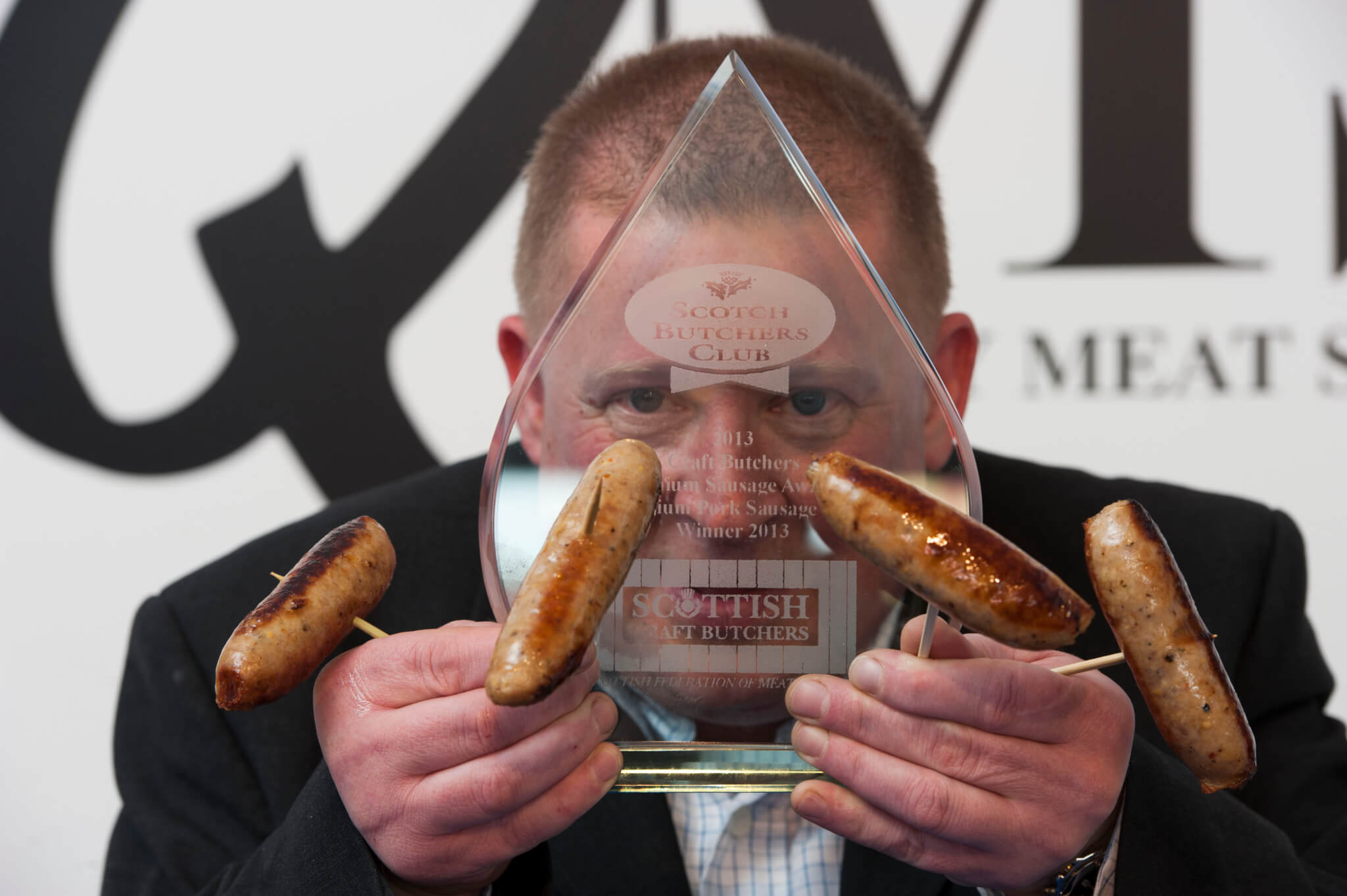 A sausage produced by a Fife butcher has scooped the title of Scotland’s top pork sausage in an award announced at the Royal Highland Show.

It is the “pork and mustard” sausage, made with Specially Selected Pork from Robert Watson of Watsons of Leven.

Mr Watson, whose father Robert farms at Croft Garry and Kirkton farms, Auchtertool, established his butcher’s business in 1990 and has a team of eight staff.

He said that he was “over the moon” to have won the award, particularly as some of the other competitors were much bigger businesses.

The judges had sampled more than 100 of the country’s finest sausages, and the winning entry was revealed on the QMS stand.

Show-goers were tempted with samples of the top sausage, and acclaimed chef Lady Claire Macdonald was on hand to present the award.

Premium sausages are defined as sausages with a meat content of more than 72%. Premium beef sausages are required to be made from a minimum of 85% visual lean meat and pork sausages 80% lean meat.

Butchers from around the country, from Ballater to Buckhaven, entered their top sausages, which were judged under a range of criteria including taste and flavour, palatability, appearance, texture and general appeal.

The line-up of beef sausages included beef, cheese and jalepeno, beef with Dijon mustard and beef, tomato and mozerella.

Uel Morton, Chief Executive of Quality Meat Scotland, congratulated Robert Watson and the team at Watsons of Leven on emerging as debut award winners and emphasised the importance of the new awards.

“Butchers deserve recognition for their innovation and product development. Many of them have also have responded to feedback from their customers looking for higher meat content sausages.”

A survey of butchers by QMSrevealed 92% of butchers’ shops experienced increased footfall in February (23 Jan – 23 Feb) following media coverage of the horsemeat issue. A survey last month revealed that the vast majority of Scottish butchers are positive about how their businesses will perform over the next 12 months.

Douglas Scott, Chief Executive of the Scottish Federation of Meat Traders Associations, said more consumers are discovering the creativity and innovation to be found inside their local butchers’ shop.

“Butchers are keen to ensure their new customers continue to shop with them and the fantastic range of top quality sausages put forward by butchers for today’s event sends out a very positive message about the combination of knowledge, traditional skills and innovation offered by our butchers.”