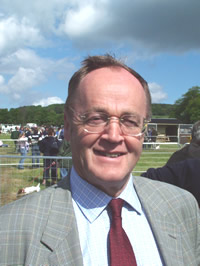 One of the best known figures in Scottish farming circles has just been honoured by the British Guild of Agricultural Journalists.

Fife’s Andrew Arbuckle has won the 2012 Netherthorpe Communicator of the Year Award in recognition of his “outstanding contribution to agricultural journalism”.

Sixty eight year old Andrew received the award, the guild’s perpetual  ‘crowing cockerel’  trophy, at a ceremony in London, where it is proudly displayed in the Farmers  Club.

Fittingly the award has gone to a man who has been immersed in the world of agriculture for his whole life.

Raised in a farming family in North Fife, Andrew went into business on his own account on land beside the mighty River Tay before concentrating on the worlds of journalism and politics.

He was the agricultural editor of the Dundee Courier for fifteen years, and now works as rural affairs editor for the Scotsman. He also still contributes on a freelance basis to the Courier and the Aberdeen based Press and Journal,

Andrew has also written two successful books which reflect his own background and agricultural  experiences, together with some of the recent history of an industry which plays a key role in the local economy.

His first book is “Footsteps in the Furrow” and he followed it up with “I Waved to the Baker”.

Andrew also had a long political career, which came to end only a few months ago when decided not to seek re-election for his council ward.

He has a leading member of the previous SNP/Liberal Democrat administration of Fife Council, and a Mid Scotland and Fife Liberal Democrat MSP in the Scottish Parliament.

Yesterday Andrew, who is also a member of the board of the Fife Food Network, told “Food from Fife” that he felt deeply honoured to be recognised by the guild and by fellow agricultural writers.

“To be honoured by your peers is very special. It has been immensely rewarding to provide a link between those who produce our food and those who consume it.”