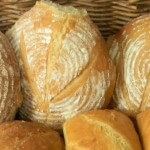 The fledgling Doorstep Bakery in the heart of the Howe of Fife continues to thrive and grow.

The community project, which has resulted from the vision of a group of local people who are passionate about good quality bread, is based in the kitchen of Collessie Village Hall.

Spokesperson Neil Stoddart said that many village businesses in the area have been lost over the last three decades.

“This is our chance to turn that situation around, and we aim to provide freshly made bread, delivered to our customers’ doors every week on a subscription basis.

“As a small artisan producer our prices will be competitive with similar quality producers, we will use organic ingredients and source them as locally as possible.

“We have initially launched with two loaf types, a Traditional White and the Doorstep Malted Brown.

“In the coming months we will introduce a Seeded Wholemeal, Sourdough and Barley loaf,” said Neil.

She said that the bakery also offers occasional and seasonal specials which have included Wild Garlic Focaccia, Hot Cross Buns and Collessie Buns.

The bakery’s buffet pizza nights have become a popular attraction in the village hall, and work is proceeding with a local blacksmith on the production of a mobile pizza oven.

Get in touch with the bakery at: