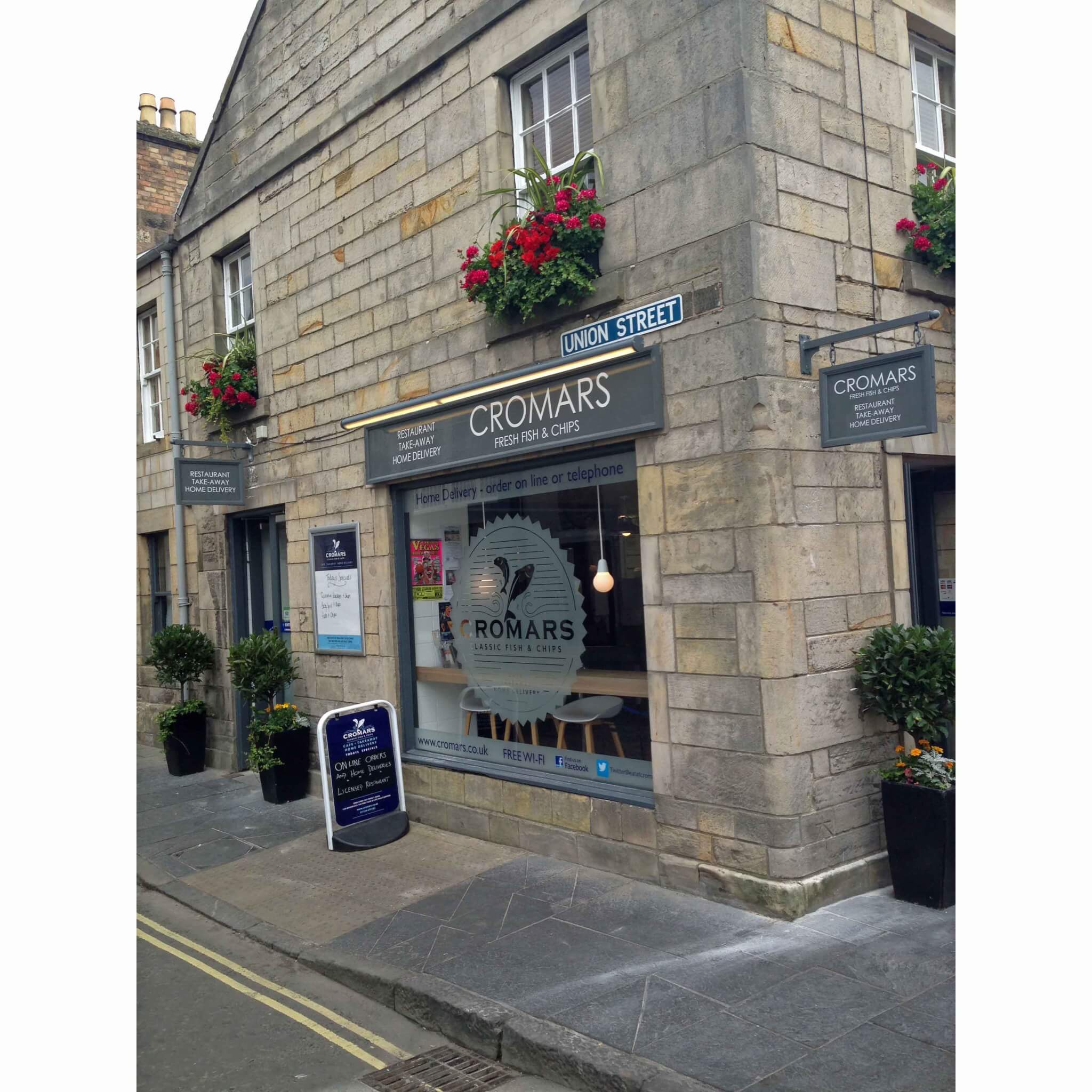 Cromars in St Andrews was announced today as the top fish and chip shop in Scotland as part of the 2016 National Fish & Chip Awards, organised by Seafish.

Competing to be crowned Independent Takeaway Fish and Chip Shop of the Year, Cromars will now ‘fry’ for glory against the nine other regional winners, one from each judging region in the UK*, as they vie for the ultimate title – the ‘best fish and chip shop’ in the UK.

To get to this stage and secure a place in the coveted shortlist, shops have been appraised across an extensive variety of judging criteria including responsible sourcing policies, shop appearance and facilities, staff training and development policies, marketing and promotional activity and local community involvement. They also received several mystery shopping assessments and in-depth audits by industry experts, to ascertain the quality of the fish and chips and the levels of customer service provided by staff.

Having being crowned the top shop in each of their respective regions, the hopefuls will now put their presentation skills to the test as they are put through their paces in one last judging round. Facing a specialist industry judging panel, consisting of representatives from the National Federation of Fish Friers (NFFF), the National Edible Oils Distributors Association, the fish catching and processing sectors, past awards champions and the potato industry, they’ll be quizzed on a diverse range of industry related topics and have to showcase how they successfully run a profitable business.

Held in London on 19 January 2016, this final judging round will determine the overall national winner that will be announced at an awards ceremony taking place at The Lancaster London Hotel on 20 January 2016.

Colin Cromar, owner of Cromars, commented: “Being a top 10 finalist in the Independent Restaurant category last year was an amazing experience; it really made us up our game and inspired us to aim higher.

“Cromars is a traditional seaside fish and chip shop, capturing the essence of Britain’s favourite dish. All of our food is locally sourced and we’re proud to say that we only use homemade, fresh products so we know exactly what we’re selling to our customers.

“We recently became the 50th shop in the UK to gain MSC accreditation from the Marine Stewardship Council. Add this to now becoming one of the 10 best fish and chip takeaways in the UK and I’d say we’re looking to end the year with a bang!

“After all the hard work and dedication shown by the staff this year, especially during the Open and Dunhill golf championships, it’s great to give something back to them.  Fingers crossed for the final!”

Paul Williams, Chief Executive of Seafish, said: “The aim of the National Fish & Chip Awards has always been to showcase the very best fish and chip businesses and individuals in the UK while setting incredibly high standards for the industry.

“The Independent Takeaway Fish and Chip Shop of the Year Award is one of the highest honours to receive as a fish and chip business. Many of our past winners and finalists have gone on to reap substantial benefits, including international fame through industry trips overseas, increased shop footfall and turnover and even launching their own products.

“We’ve had so many excellent shops come through for each stage of the competition this year and the final 10 really do excel in upholding the high standards we set.  I’d like to offer up my congratulations and wish them the best as they prepare to continue their quest towards becoming the new champion, but also thank them for consistently helping us to reinforce the UK’s reputation as the home of the world’s best fish and chips.”

Culminating in an awards ceremony at The Lancaster London Hotel on 20 January 2016, The National Fish & Chip Awards are recognised as one of the most prominent and respected seafood industry events in the UK. Widely considered as the ‘Oscars’ of the fish frying industry, they celebrate the great British tradition of fish and chips, recognising the best talent, quality and choice offered by fish and chip businesses.

As the top 10 finalists, Seafish will now invite the shops on an all-expense paid study trip later in October to Ålesund, Norway, organised by award sponsor the Norwegian Seafood Council, to witness first-hand why the country is regarded as one of the world’s most sustainable fishing nations.

For further information on The National Fish & Chip Awards please visit www.fishandchipawards.com. Follow @FishnChipAwards on Twitter for all the awards news and information.